The phlebotomy classes
paid off. I can tie off and stick
like nobody’s business.
For so long I’ve been
been pricking the needle
time and time again
to float above the pain

of betrayal and lost love
and this cold isolation.
I still have the teddy bear
a chick left me when I
proposed and she figured
a teddy bear and a dear john
letter would suffice.

The needle’s probing
the spoon right now and
drawing it in. The teddy
bear’s big arm is strapped;
I ram the needle into the
bear and hammer the
pointy end and toss the

memory into a giant sharp’s
container and stick my fingers
down my throat and amen
the porcelain again and
prepare for what’s to come
because deep down neither I
nor the bear deserves this shit. 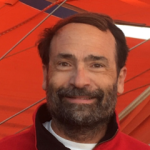 Richard L. Matta grew up in New York’s Hudson Valley, attended Notre Dame, practiced forensic science, and now lives in San Diego. He and his golden-doodle dog both enjoy boating on the Bay and hiking in the hills. Some of Richard’s work is found in Ancient Paths, Dewdrop, New Verse News, San Pedro River Review, and Healing Muse.