Ron Czerwien’s maternal grandparents lived
in a cottage in the woods. All day long his
grandfather, dressed in Lederhosen, stood
on the porch sawing a log, his grandmother,
wearing a paisley dress, poked her head out
of the kitchen window, smiling. Every hour
the cottage roof sprung open and Ron Czerwien
popped up crying “Cuckoo.” All of them were
carved from Lindenwood, like the clock that
hangs on a wall inside the home of the local
Bürgermeister. Outside, a mob of angry
villagers wielding torches and pitchforks
prepare to destroy the monster. They’ve done
this before, over and over, since time was
kept. Always get it wrong. Some innocent
who’s doomed because they are different.
Before you call me a monster, answer this:
how many body parts do I have to nail
to this tree to represent the number
of divisions between us? 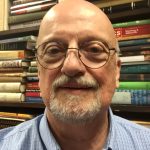 Ron Czerwien is the author of a little rain, a little more, published by Bent Paddle Press in 2018. His poems have appeared in After Hours, Bramble Literary Magazine, and Rosebud Magazine, and online at The American Journal of Poetry, Big Toe Review, Moria, Nth position, Qarrstiluni, Right Hand Pointing, Shampoo and Star Line. Some of his collages have been published in Moss Piglet. His poem “Where We Stand,” was included in the anthology Sheltering with Poems, Community & Connection During Covid published in 2021. Ron is the owner of Avol’s Books LLC, which sells used and out-of-print books on the internet. He serves on the board of directors of The Council for Wisconsin Writers.