Last night you dreamed about me cleaning out the basement,
dispersing heart dust into the atmosphere, aggravating
my asthma, detritus settling in my morning coffee cup.
You said I shook it off and cooked chicken wings in the oven
with three different sauces. My next-door neighbor
with the 8-inch cock stole my blue ribbon without preparing
a damned thing. We sat down on rickety dining room chairs
on a linen-draped card table two feet into the street
and ate store-bought cinnamon rolls and swilled chocolate milk
from a dirty wax carton. There was weather moving in from the north,
never a good sign in the Midwest, and you told me that he said
that my hair looked real good that day. He stuck his head
in the mailbox and pulled up the plastic flag to let the postal
worker know there was a package ready for pick-up. I drove
to your apartment and we drank fancy cocktails until
we both passed out on the living room rug. 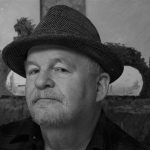 John Dorroh has never had to use a defibrillator, nor has he fallen into an active volcano. He did manage to bake bread with Austrian monks & consume a healthy portion of their beer. Two of his poems were nominated for Best of the Net. Others have appeared in journals such as Feral, Burningword, Tilde, North Dakota Quarterly, Pinyon, and Selcouth Station. His first chapbook, “Swim at Your Own Risk,” was released in March, 2022. A second one is pending. He also writes short fiction and the occasional rant.