On the beach they approach me,
the stone angels, mouths a dark
choir of ooo’s, mouthing words
with their blank Byzantine faces
so they sound like waves
sucked back to the spellbound sea.
Circling, they bow their heads
low, halos of stone dipping.
Their legend stings with reproach
and disintegration, Grecian
faces almost benign.
Their stone sleeves billow out
as they hold out the laws,
the laws almost lost in the scrolls
of their robes. The angels of stone
encircle me, their greeting
eroding my will: “Welcome,” they say,
“to these blue hours beyond
belief, to the petrified morning.” 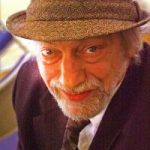 Nicholas Johnson (1944-2019) was the co-founder and editor of BigCityLit. We encourage you to read our 20th Anniversary Issue, which is dedicated to Nicholas’ memory.