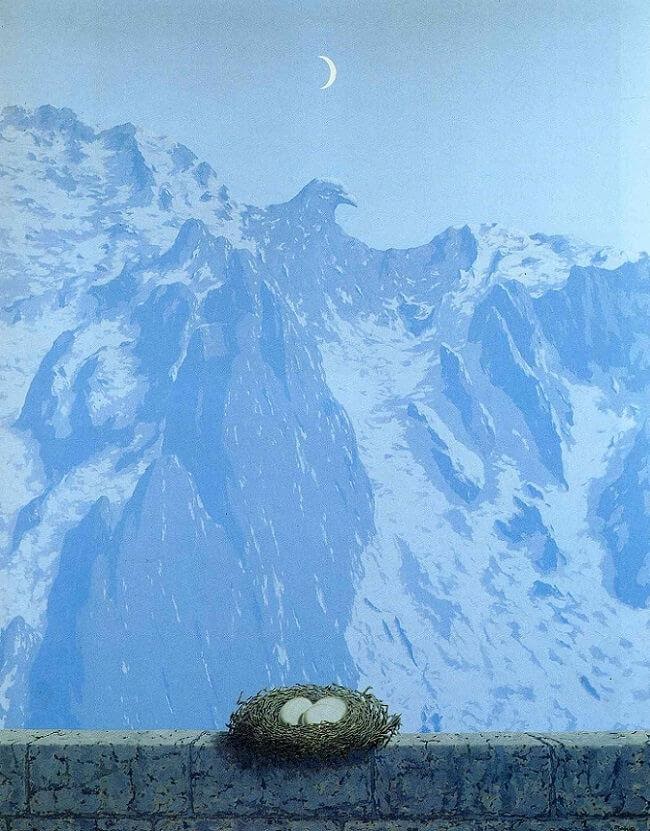 Everything comes alive when contradictions accumulate.

—Gaston Bachelard, The Poetics of Space

…no such combination of scenery exists as the painter of genius may produce.

René Magritte’s genius lies in his ability to transcend and subvert artistic convention in order to envision a hitherto unimaginable reality. In the introduction to Michel Foucault’s essay, This is not a Pipe, Magritte is quoted as proclaiming the ascendancy of poetry over painting, an inversion of sorts of Horace’s apothegm from centuries earlier, ut pictura poesis, that poetry should aspire to painting (Foucault 2). Magritte preferred to think of himself as a philosopher, using paint rather than words to communicate his thoughts. Wallace Stevens, writing about the relations between poetry and painting, asserted that the imagination always makes use of the familiar to produce the unfamiliar, and that we live in a state of tension due to the balancing act between reality and the imagination lying at the heart of our daily existence.

This confluence of philosophy, poetry, and painting led me to an unexpected revelation in trying to understand the appeal of Magritte’s Domain of Arnheim. I found myself with the unlikely triune of Magritte, Friedrich Nietzsche, and Edgar Allan Poe, using the French philosopher Gaston Bachelard as an intermediary. The presence of Poe was not surprising since the painting is based on one of his stories. However, reading the chapter on Nietzsche in Bachelard’s Air and Dreams allowed me to dispel my confusion over the seeming incongruence of Magritte’s painting and the Poe story.

I first viewed the Domain of Arnheim with the usual admixture of wonderment and perplexity. I imagined Arnheim as some mythic hero from a Norse saga, his domain being the ice-capped, frigid mountains in the distance. The eagle, perched menacingly, overlooking the valley, was undoubtedly the dream-image of some heraldic Norse symbol. Only later did I discover the connection with the Poe short story, one unfamiliar to me. How does one imagine a literary work when the first exposure is by means of a painting? I anticipated Poe’s story to be set in an icy blue and stark solitude, a vast, unforgiving domain in which a solitary explorer wanders, encountering adventures with supernatural overtones.

Imagine my surprise to find the story completely unlike anything I had ever read by Poe. When I think of Poe, I think of the man at his desk in Francisco Goya’s etching The Sleep of Reason Produces Monsters, with his oneiric demons. Yet, nothing about the story was apposite to that image; it is Poe’s paean to the power of art and the poetic imagination. It centers on a nouveau-riche millionaire, whose goal is to create the perfect landscape. Poe’s protagonist Ellison extols the “supreme majesty and dignity of the poetic sentiment,” best manifested by the “creation of novel forms of beauty” (858). Subsequently, Ellison claims that “the original beauty is never so great as that which may be introduced” (858).  Besides beauty and magnificence, one of the qualities of Ellison’s landscape should also be strangeness.

In the denouement of the tale, Ellison approaches this landscape on a body of water surrounded by lush verdure, with bedizened scenery of opulent colors expressing the apotheosis of poetic sentiment. Entrance is through a magnificent gate. It is as if the scene was created by Rilke’s earth-angels, possessing what Poe refers to as a “death-refined appreciation of the beautiful” (861). Some readers have commented on what they perceive to be the funereal aspect of this story, the boat traveling along a romanticized version of the River Styx.

Magritte has stated that his goal is to achieve the poetic in painting and it is undeniable that his Domain of Arnheim is supremely majestic and, in its own way, quite poetic. Yet, I found myself bemused, indeed baffled, in trying to establish the connection with Poe’s story. Of course, the unexpected is one of the main attributes and charms of Magritte. I subsequently learned that arn is the word for eagle in old High German, thus Arnheim is the home of the eagle. The eagle, besides being a frightening bird of prey and a heraldic symbol for the Roman legion, has long been a symbol of divinity going back to Zeus. Poe’s story is concerned with creating the perfect landscape, more beautiful than what could really exist, however, the overwhelming emotion I felt when looking at Magritte’s landscape was melancholy. The nest, offering its shelter to life symbolized by the eggs, is precariously balanced on the edge of the abyss under the melancholy moon. We are forced to ponder “the inconceivable fundament of our existence. The unbounded …casts a person out from his own self” (Foldenyi 91). “Melancholy …opens our eyes to the frailty of human life” (86). Yet, this melancholic vastness, reigned over by the fearsome eagle, has an austere loveliness and beauty.

Reading Gaston Bachelard has given me a much greater understanding of the connections between reverie, imagination, and the language of poetry and art. I now have a deeper insight into Wallace Stevens’ discussion of the role imagination plays in “helping us live our lives” (36). It is after reading the chapter in Air and Dreams concerning Nietzsche’s ascensional psyche and his vertical poetry that the connection between Poe’s story and Magritte’s painting began to emerge.

Poe’s Arnheim is an example of what Bachelard would call terrestrial poetry, borne out of images of the earth such as greenery and flowers, also with water playing a role given the boat ride down the river. Whereas, in contrast, Nietzsche is a poet of the air and the summits. It is only through his trinity of air, cold, and silence that we can confront the immensity and mystery of our being. It is a world stripped of artifice and sentiment. “Ice is near, the solitude tremendous, how freely one breathes” (Bachelard 140). As with Zeus, the eagle and the thunderbolt are Nietzschean symbols. The eagle symbolizes the pure power of freedom – it reigns over the abyss. “My eagle is awake…with eagle talons he grasps for the new light” (153). Poe’s Arnheim, on the other hand, is what Bachelard calls Shelleyan, filled with intoxicating warmth, beauty, and vibrant colors. Magritte’s Arnheim is one of solitude, silence, and pure, cold air; it is of the aerial imagination, totally free, a means of escape from our earthly state. In Bachelard’s words, only in this cold silence and melancholy solitude can one “weigh the world” (141). When faced with the abyss, one must rise to the summits. In a poem, Nietzsche avers, “never did I feel nearer me sweet security…does not the ice of my summits glow?” (Bachelard 151). Thus, both Poe and Magritte are, in their own way, describing an idealized landscape.

After reading Air and Dreams, not only do I understand how Magritte’s Arnheim can be viewed as a pictorial representation of Poe’s Arnheim, albeit with a different poetic perspective, but I have come to see Magritte’s aerial imagination at work in his other paintings as well – paintings which I have struggled to understand. The Battle of Argonne, where a boulder is confronting a flocculent cloud, can be interpreted, in light of Wallace Stevens’ essays on reality and imagination, as imagination (the cloud) locked in its ongoing struggle with reality (the rock). A similar interpretation applies to the huge boulder suspended in a Poussin sky, drifting over blue-gray mountains in A Sense of Reality. Poetic reverie – as described by Bachelard – and reading philosophical essays on the imagination provides a key to unlocking the secrets of these paintings, as well as the ways in which literature and art serve to enrich each other. The centuries old confluence of poetry and painting articulated by Horace, and reiterated by Wallace Stevens, still rings true today.

Bachelard, Gaston. “Nietzsche and the Ascensional Psyche.” Air and Dreams (An Essay on the Imagination of Movement), The Dallas Institute Publications, 2011.

Foucault, Michel. This is Not a Pipe. University of California Press, 1982.

Kimmo Rosenthal has turned from a career in mathematics and teaching to writing. Recent work of his has appeared in Indefinite Space, Hinterland, The RavensPerch, MacQueen’s Quinterly, The Fib Review, The Decadent Review, and After the Art. He has a Pushcart Prize nomination and is also a Staff Reader at Ploughshares.