The scent of a summer rain on hot asphalt
takes me back to elementary school in Brooklyn,
the short walk to the corner to PS 98
under a canopy of young maples.
Odors of garlic and lemon on broiling chicken,
bleach, and silver polish resurrect
my mother, dead more than thirty years,
those fragrances still attached to her

formidable presence. Even now, Aramis
makes me wince and recoil. It’s a cannon blasting
me back to those years—two decades!— when I
surrendered my autonomy, plodded in a fog,
under the spell of a shrink who I believed
held my health and happiness in foreground.
A stink that ignites an explosion of memories
with the rage I was forbidden to feel or speak.

Let me inhale the aromas of onions frying,
these mornings of grapefruits squeezed
on a juicer, working since 1992. Give me
Chanel #5, straighteners and perms, Aqua Net,
Revlon nail polish and lipstick, the perfumes
of my teen years in the sixties. Today, a whiff
snow coming on late autumn’s wind.

*n. A certain scent that can sweep you back to childhood.
From The Dictionary of Obscure Sorrows by John Koenig.
Pronounced “yoh-ree.” 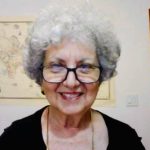 Joan Mazza worked as a medical microbiologist, psychotherapist, and taught workshops on understanding dreams and nightmares. She is the author of six self-help psychology books, including Dreaming Your Real Self (Penguin/Putnam). Her poetry has appeared in Crab Orchard Review, Prairie Schooner, Italian Americana, Poet Lore, Slant, The Nation, and elsewhere. She lives in rural central Virginia, where she writes every day.