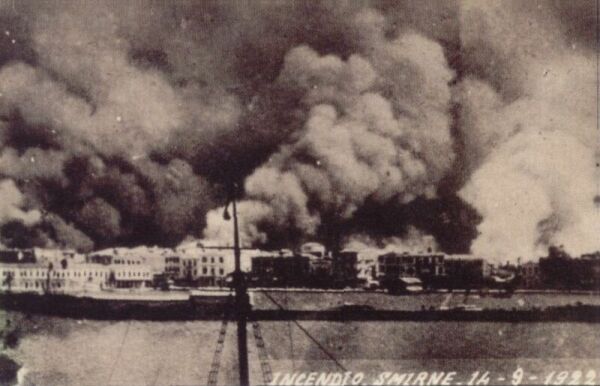 Despite the arguments of deconstruction, stories still have the power to transform lives. If I didn’t believe this, I wouldn’t be a writer. One of my tasks as a poet is to listen carefully to what people tell me, and then take the residue of forces that shaped and haunted their lives for an imaginative interpretation. I am not naïve enough to believe poetry eliminates injustice. It is, however, an honorable way to deal with suffering.

It was two o’clock in the morning. Late February. I sat at a table in the Zodiac Greek Café in Queens, along with a friend. Her long red fingernails caught the light. We had just consumed a bottle of the best Cyprian wine. Snow was on the ground outside, a bitter chill in the wind. It was good to be there. Scents of jasmine, rose, and amber-laced perfumes mingled with stale tobacco from butts in ashtrays. The band still played. On the dance floor, a lone couple danced, and for each other.

The man removed his tie, kneeled, balancing his weight on one foot. He passed the tie, back and forth between his legs. The woman held up her heavy hair as she moved. Sweat stood out on her forehead. Soon the band would stop. It was time to go home. I pulled on my coat, and passed by Euli, the band’s singer, who had sat down to rest.

Euli regarded me, as usual, with affection. She was bleached blonde, forty-five, heavily made up, with thick eyeliner, blue eye shadow, and crimson lipstick. A cross hung in the deep cleavage between her breasts. She was also the one who “read the cup” for our neighborhood, a diviner who practiced the ancient art of reading patterns from coffee grounds. I was tired that night. “Nothing you said,” I told her, “has come true.” She looked deeply into my eyes. “Do not worry,” she said. “It is coming. It is coming. It is coming.”

That was a typical night for me, four years ago, as I wrote my Smyrna poems. I did not know that a few months later I would get drunk with former members of the Greek Resistance up near the Albanian border; in Konitsa, cool and mountainous, a place where many Greeks were furriers by profession. Gypsies played, and I boldly danced, in my white gauze blouse, when the other women were too shy. I can still hear the bleat of goats on winding paths, taste ripe, fresh summer tomatoes bursting with juice. From Thessaloniki back to New York, from Kusadasi to Athens, I needed to create my own city, invent a world ancient, yet modern.

I live in a neighborhood in New York called Astoria. A large part of Astoria’s population is of Greek descent. They are very much old-world Greeks, distrustful of outsiders. My life seemed to revolve around Manhattan, both professionally and socially. Despite that, in time I got to know my neighbors. Over many cups of strong black coffee, they opened up and began to tell me of a city called Smyrna, in Anatolia, Turkey. They described how their grandparents had become refugees in September, 1922, when Mustafa Kemal (Attaturk) invaded Smyrna with his troops and became the leader of Turkey.

At that point in time, Europeans were seen as an imperialist foreign influence in Turkey. However, all this was the result of what the decayed Ottoman Empire had created for Turkey:  the promise of a leader, Mustafa Kemal, and a population who was dissatisfied by the involvement of Turkey in the First World War, in which the country sided with Germany. Kemal had a dream for Turkey, a vision of Turkey as a modern and secular nation. And this was accomplished, to a great extent unfortunately, at the expense of the European population of Smyrna. The “Christians” had to go. Literally. Many walked into the sea, to die.

Why had I not heard about this, growing up? Perhaps it has to do with oil interests in the Middle East, and elsewhere in the world. In any case, I had worked as a journalist for newspapers in Louisiana and California, and I was determined to find out more about what happened, back in 1922, in Smyrna.

I soon learned that Smyrna was the site of the first mass-scale genocide in the 20th century. Approximately 1 million Greeks and 1.5 million Armenians were killed before, during, or directly after Attaturk’s invasion of Smyrna. My research took me to the Estia Nea Smyrnis (“New Smyrna”) fraternal organization in Athens, where I accessed documents in the library. I worked with Armenian historian Aram Arkun in New York, from the Zohrab Information Center of the Armenian Diocese. The work of historian Marjorie Housepian Dobkin was also helpful. People I did not even know would hear, by word of mouth, that I was collecting Smyrna stories and call to talk to me. My friend Dean Kostos, a poet of Greek American descent, provided valuable feedback on many pieces. In this way, my work on Smyrna began to take shape.

The poems in this edition of Big City Lit are from a section of a manuscript, and just a part of the complete cycle, which presents other characters besides Ewan and Asazi, and other stories. I must say that the main literary influence on this work would be Pat Barker’s Regeneration trilogy. An English writer writing about World War I, Barker was obsessed with the psychological effects the war had, particularly in creating ghosts that would not leave. And why not? One ghost story, a love story, is my very own neighbor’s, an elderly woman, who still lights a candle for the husband who went to work in Smyrna one day, and never came home.

The quote used in my poem, “The Vow”, is from The Blight of Asia by George Horton, who was in the American diplomatic service in Smyrna at the time. The experience of Ewan, the journalist in my poems, was not uncommon. Reporters could not get their stories through, or were often ignored. To this day, Turkey still denies the Armenian genocide.

In Smyrna, in September of 1922, the tallest and most modern buildings were destroyed first.Among the principal buildings destroyed were the hotels Splendide, Palace, and Smyrna Palace, and a new building called Huck’s, which, although it had been eight years under construction, was not completed; a big cathedral-like Italian school, the Sporting Club, Smyrna Club, Smyrna Theatre, the French, British, American and Danish consulates, the Armenian Church, the French cathedral, the Greek Cathedral, the YMCA, and the whole of Frank Street, where were principal shops.
( The Tragedy of the Christian Near East, by Dr. Lysimachios Economos, 1923, 1997)

Damage in Smyrna was estimated at 200 million dollars, an astonishing sum for that time. The city was later rebuilt, and renamed Izmir.

My own background is not Armenian or Greek, and is not Christian. And I am not anti-Muslim. At times I was criticized, challenged, and questioned for writing about Smyrna, and told my choice of material was inappropriate. All I can say is, I was haunted a few years ago by the photos of buildings crashing to the ground in fiery debris; vintage photos of clouds of smoke over the Smyrna harbor. And in September of 2001, seeing images of the World Trade Center on TV, I was once again reminded of that smoke.

Would that we could live in a world like the golden age of Cordova, where Jews, Christians, and Muslims all lived in peace… and a statue of the angel Raphael guards the city.